Chip-off forensics is an acquisition procedure which involves physically removing the non-volatile integrated circuit (IC) from a device and reading it directly on an external specialized reader. It is often considered a last-option technique, as repairing the phone to a working state post-IC removal, is difficult. 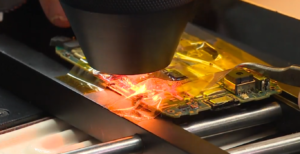 This procedure only works on certain models of phones that do use an EMMC chip and UFS chips as long as the device isn’t encrypted. We are finding more recent devices such as Samsung S7, S8, and S9 that are now encrypted, thus making chip-off impossible. Samsung is not the only manufacturer that is encrypting their devices, most manufacturers have followed suit.

Chip-Off is also not possible on other types of chips that are in iPhones and iPads. This is mainly due to encryption implemented by Apple.

A basic video overview can be seen in the link below. The video was shot at our lab by CBC news.

We are proud to partner with various agencies and organizations.

Which includes the following: